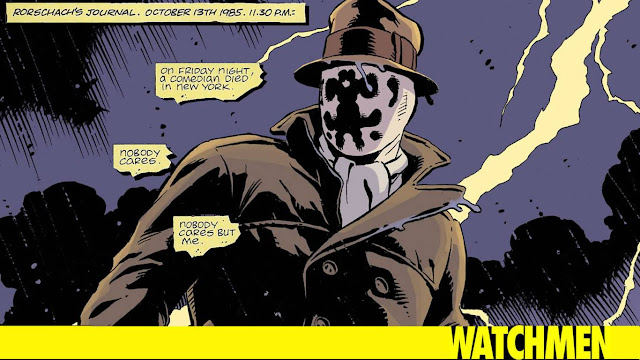 So, I read the graphic novel Watchmen by Alan Moore and Dave Gibbons recently, and then I decided I deserved it and should watch the movie too. At first, I was worried that maybe this is just one of those things that people read and talk about to be pretentious, but wow! This book has a lot of things going on it. I'm really glad I read it, but I feel like I need to go reread it at least twice because I realized that there were a lot of things that I didn't fully notice the first time through, background characters and images to which I hadn't paid enough attention.
The setting is New York City in 1985, in a world where vigilantes (or as we sometimes like to call them, superheroes) used to be prevalent until 1977 when the Keene Act required "costumed adventurers" to retire. The only character with any extraordinary powers is the nigh-omnipotent Dr. Manhattan. The others are simply everyday people who decided to dress up in costume and take the law into their own hands. It's a bit more of a realistic look at how the superheroes that we love to idolize in comic books might actually work in the real world; unsurprisingly, it's not a happy story.
The main character is Rorschach, who investigates the murder of the Comedian (a vigilante vaguely reminiscent of both Captain America and the Joker). Rorschach is one of the few vigilantes who refused to retire after the Keene Act, and he worries that a mask-killer is planning to kill other costumed adventurers, warning several other members of the disbanded Crimebusters team.
Dan Dreiberg, or Nite Owl, is at least superficially similar to Batman, with a reliance on expensive gadgetry to enable him. He is Rorschach's previous partner, and possibly his friend. After the Keene Act rendered his vigilante activities illegal, he retired and stored his equipment underground.
Sally Juspeczyk (Silk Spectre) claims not to miss her previous vigilante lifestyle. Her mother, the first to bear the Silk Spectre name, raised her to fight crime from a young age.
Adrian Veidt (Ozymandias) or "the smartest man in the world" retired before the Keene Act, and cashed out on his superhero image, focusing on building a sprawling financial empire.
Dr. Manhattan (Jon Osterman) gained his powers during an accident in nuclear physics experimentation. He seems to be practically all-powerful, but his unique way of experiencing time causes him to lose touch with humanity.
Overall, most of the characters have a lot of issues, which probably makes a lot of sense--these are people who are compelled to act in ways that aren't really the most normal. The book examines the comic book superhero genre, as well as struggling with issues of politics, morality, identity, gender, sexuality, and patriotism. 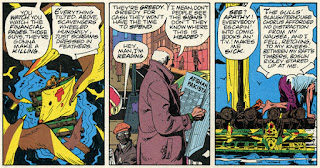 The story is complex, but the details are also a big part of what made the book such a fascinating read for me. Even the background details are important and should not be ignored. The pages where every other panel alternated between newsstand scenes and panels from the Tales of the Black Freighter comic book that one character is reading within the scene, with dialogue and narration over both types of panels are some of my favorite.
The way different themes and elements keep recurring throughout the story is satisfying: the recurring imagery of the Comedian's smiley face button with the bloodstain on it, or the references to time and clocks scattered throughout (the twelve chapters of the book, the Doomsday Clock, Dr. Manhattan's story in Chapter IV, et cetera). It's a reminder that this work is composed as a whole, whereas many ongoing series do not have the luxury of forming a complete body of work with a beginning and an end, and consistent writers, artists, and editors.
I can't help but wonder how much I'm missing out of this book because I'm not very familiar with the time period or the history. My history knowledge beyond World War II is rather sketchy, so while I understand the concept of the Doomsday Clock and the Cold War and fears of mutually assured destruction, I'm afraid there may be nuances that have passed over my head.
I've never seen a comic book adaptation movie quite like the Watchmen movie. The credits sequence was really fun; I had forgotten that movies used to have credits at the beginning like that at all. I feel like the Tales of the Black Freighter segments should have been left out; they just didn't really blend in well with the rest of the movie, while they worked well in the graphic novel. It just didn't transfer well between the mediums. A lot of the scenes and dialogue seemed to be pulled exactly from the book, which was exciting for me. On the other hand, I'm not sure how comprehensible this really would be for people who hadn't just read the book. It was quite long already, so the smaller plot elements that were cut out or not fully examined seem to make sense for a movie. Also, the ending was changed from in the book, but I'm still undecided about how much this really mattered. I suppose opinions on it could differ depending on what one believes a movie adaptation should do: remake something in a new medium for people who have already seen the original, adapt a story to a wider audience, tell a somewhat different story that is more timely, or something else.

Watching everything in the movie format after just having read it all really made me think about how the mediums are different. In the graphic novel, the reader can choose how long to stare at a particular panel of gore or violence, whether to skim by it or not. There is no motion on the page, so the motions are filled in by the reader. In the movie, scenes last as long as they last, and it's just a bit more viscerally affecting to see bullets destroying peoples' bodies or characters violently attacking each other on screen than it is while you're only looking at static drawings.
In conclusion, I'd highly recommend anyone with interest in comics, superheroes, sequential art, literature, fiction, or reading to read Watchmen. It's worth the time. 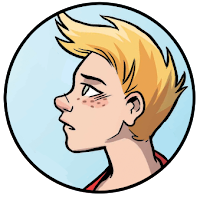 Strong Female Protagonist is a webcomic by writer Brennan Lee Mulligan and artist Molly Ostertag. The protagonist, twenty-year-old Alison Green, used her powers of near-invincibility, super-strength, and flight to fight super-villains, but quit her crime fighting team to go to college. Alison fought as a superhero since she was fourteen, and attempting to continue making a difference and do good things in a world where she cannot solve problems by punching them is a difficult transition for her. She is an extremely relatable character.
Currently in Issue 6, Alison is kept ludicrously busy by her job as a firefighter, her schoolwork, and her work to create Valkyrie (a network of superheroes to help provide protection and support to women leaving abusive partners). In this issue, Alison meets Max when she rescues him from a burning building, but they ultimately disagree on matters of morality. When she discovers that Max has a superpower that can help one of her friends and save many lives, she physically forces him to use it despite his resistance to her plan. Later, she feels guilty for forcing Max to use his power, but also believes that she saved many lives and helped her friend with no adverse effects to Max (beyond the issue of forcing him to act against his will). It's a complicated problem, and one that Allison and readers both do not quite know how to handle; it's a real problem, and there are no easy answers. While the comic is entertaining, it's also a platform for discussions of morality and thoughts about how these ideas still apply to our own world.
This is a comic that manages to practice realism without resorting to "grittiness," where the most significant conflicts are not solved by punching things, and sometimes not solved at all. Nonetheless, Alison has an optimistic faith in the innate goodness of humanity that is heartening, and the comic is not depressing or overwhelmingly negative in tone. Despite Alison's "Mega Girl" superhero persona, she is growing up and moving beyond a simplistic view of the world, and this is a comic about her journey. She is a "strong female protagonist"-- a female character who is realistic and flawed, but ultimately attempting to do good in the world.
You can find the comic online at strongfemaleprotagonist.com.
Posted by skj2241 No comments: