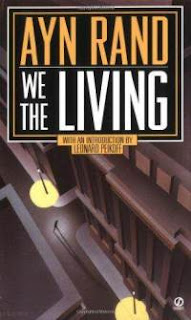 Ayn Rand, author of Atlas Shrugged, Anthem, and The Fountainhead, wrote We the Living. It was frustrating to watch the characters descend down ever-darkening paths, while I could do nothing to stop them. Frustrating as it may have been to read, I couldn't put it down. 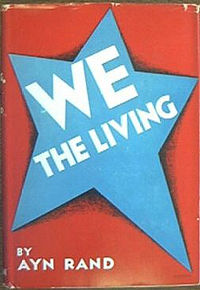 The protagonist, Kira Alexandrovna Argounova is the daughter of Galina Petrovna Argounova and Alexander Dmitrievich Argounova. Her father was owner of a textile factory- before the October Revolution, that is. The family, including Kira's sister Lydia, travels to Petrograd, returning home. They return from several years in the Crimea unsuccessfully attempting to wait out the current regime. Labeled as bourgeois, Kira will not have an easy time in Soviet Russia. Kira was the most frustrating character for me, because I disagreed with so many of the choices she made. 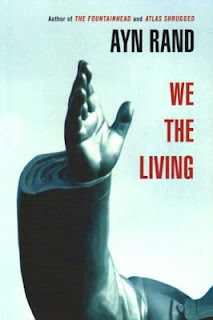 Warning: Spoilers.
Another main character, Lev Sergeievitch Kovalensky is the son of Admiral Kovalensky. The Admiral was blinded in a war and unknowingly sheltered counterrevolutionaries. For this, he was shot. Leo is also considered bourgeois.Throughout the novel, Leo's loss of self is painful to watch.
Our third important character, Andrei Taganov is a Party member who fought in the October Revolution. Andrei has given his life to the ideals he believes in. His incorruptibility makes him an exception rather than the rule amoung Party officials. As Andrei's beliefs crumble, so will he.
The fates of all three are irrevocably intertwined. This book made me very emotional. However, between outbursts of anger, I had plenty to ponder. We the Living was definitely worth the read.
There is an essay contest available here.
Posted by skj2241