Today's post is a double feature on George Orwell. Two of George Orwell's most well-known books are Animal Farm and 1984. Warning: spoilers below. 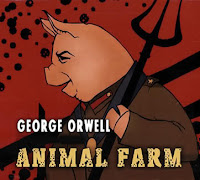 Animal Farm is about the Manor Farm, where the tyrannical Jones forces the animals to work for his own profit. When the animals rise up and throw off their shackles of slavery, they rename the farm Animal Farm and establish Seven Commandments for all to live by. As the pigs rise to the top, the Seven Commandments are attenuated to serve the interests of those in power. In the end, the animals have succumbed to a new tyranny.

1984 is set in an Orwellian vision of the year 1984, with a world suppressed by totalitarian regime. Winston Smith, the protagonist, works at Minitrue, the Ministry of Truth. His job is to alter the past to fit the circumstances of the present. He is a party member, constantly under the surveillance of Big Brother and the Thought Police. Winston begins a forbidden romantic relationship with Julia, and begins to spend time among the proles, or commoners, to avoid the ever-present telescreens. When Winston is betrayed by Inner Party member O'Brien, he is taken to Miniluv, the Ministry of Love, from which he will emerge a different man.
If you're interested, you can buy the books here