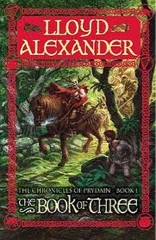 Happy Easter to everyone!
Today I'm blogging about a series of children's books, The Chronicles of Prydain by Lloyd Alexander. I know I enjoyed these books immensely when I was younger, and can still enjoy them now. They would probably be appropriate for anybody capable of reading them. There are five books in the series, which begins with The Book of Three. The main character, Taran, is an Assistant Pig-Keeper who yearns for adventure. Along the way he makes new friends and faces great challenges. Taran isn't the perfect hero - he is young and makes mistakes. However, he always tries to learn from these mistakes. The Black Cauldron, the second book of the series, won a Newberry Honor in 1966. The final book of the series, The High King, won a Newberry Medal in 1969. The books are available on Amazon. Lloyd Alexander has also written other books, including the Westmark trilogy and the Vesper Holly series. The Prydain Chronicles can be bought here