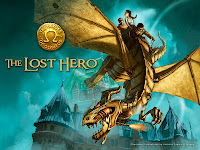 The Lost Hero was written by Rick Riordan. It is part of the Heroes of Olympus series, which unravels the new prophecy revealed at the end of the Percy Jackson and the Olympians series.

This book gives you lots to think about right from the very start. Jason wakes up holding hands with a girl who claims to be his girlfriend. Unfortunately, he doesn't have any memories of her - or of anything at all for that matter. Piper and Leo, Jason's girlfriend and best friend, respectively, are understandably worried. However, the three young demigods are about to have a lot more on their minds than just mysterious memory loss. As demigods, they make great monster magnets. They may even have a part to play in the Great Prophecy, which was revealed at the conclusion of the Second Titan War.

The Lost Hero gives you plenty to puzzle out. Who is Piper's goddess mother? What is Leo's secret that he's keeping from everyone else? Why does Jason seem to know all about the demigod world, and yet have no memories of his past? And what is behind the mysterious impossibilities becoming ever more common as the young demigods proceed on their quest? The journey continues in The Son of Neptune, Rick Riordan's next Heroes of Olympus book.
Posted by skj2241