The Son of Neptune

The Son of Neptune is the second book of the Heroes of Olympus series by Rick Riordan. I suggest you do not read this post unless you have already read the first book of the series, The Lost Hero, as there may be spoilers. 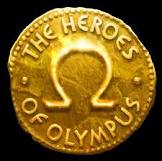 At the end of The Lost Hero, we have a good idea of where the missing Percy Jackson is now. The Son of Neptune rejoins Percy at Camp Jupiter, where he has made some new friends: Frank Zhang and Hazel Levesque. When the three embark on a dangerous journey to Alaska, they have a chance to regain their cohort's honor - or to die trying.
Hazel is a daughter of Pluto who's keeping some dark secrets to herself. Hazel's secrets will be revealed before the group confronts a powerful Giant. Frank is a nervous kid whose life is tied to a piece of firewood. He knows his family had a powerful inherited gift, but Frank doesn't even know what the family power is, much less how to use it.

Personally, I enjoyed reading The Son of Neptune and thought it was a good book for children.
Posted by skj2241