Any images, information, and opinions expressed on this site are neither approved nor authorized by the Boy Scouts of America and/or Philmont Scout Ranch.

The previous week we worked on the flood issue. I spent most of the week working on the first two parts of the main article, researching the science behind flash flooding and the Rayado Flood of 1965. That issue is out in print today.

Last Sunday I hiked Wheeler with six others from my department. That was a pretty challenging hike, but now I've climbed the tallest mountain in New Mexico, 13,159 feet above sea level. The view was pretty nice, and we ate watermelon at the top. 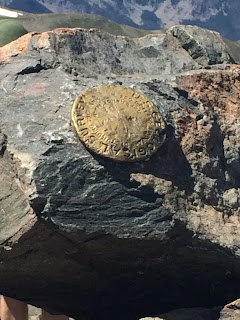 This week I was in the backcountry on assignment. We started at Harlan and then hiked to Ute Gulch. After dinner there, we hiked to Cimarroncito for the night and then after a few pictures in the morning, hiked to the Cito Turnaround just barely in time to catch the bus.

Harlan's program is 12-gauge shotgun shooting and reloading. Ute Gulch is another commissary camp like Phillips Junction that I would consider working at next year, but I'm not sure which I liked better. Cimarroncito is a climbing camp, and also has a really cool bouldering gym, where we spent the night.

After making it back to base, I went back out to the Cito Turnaround with another photographer to spend the night and next morning at Clarks Fork, one of the Western lore camps. The Clarks Fork campfire area has a view of Cimarron's city lights, and the camp also has hot water, showers, electricity, and possible cell phone reception.

I'm not sure, but I might try to make it to Ponil's cantina show, which is supposed to be exceptionally good this year, and maybe Rich Cabins as well.

Next week I will be in the backcountry on assignment again. I believe the plan is to start as close as possible to Black Mountain, hike in to the camp and spend the night there. Next day, we would hike to Crooked Creek and spend the majority of the day there. Then we could hike to Phillips Junction and spend the night there to be sure to get a ride out in the morning. Black Mountain and Crooked Creek are the only two staffed camps that do not have direct access by backcountry road.