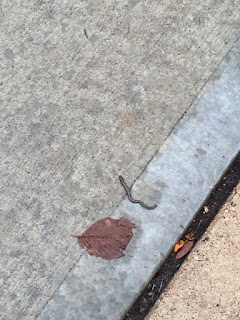 Well, it's been a long time since I've posted anything, and today is Halloween, so I thought I'd share one of my personal weird fears.
Whenever it's rained really hard and the sidewalks are still all wet, worms like to come out and wriggle about on the sidewalk. I don't really have a problem with worms or with them wriggling about--that's generally just what they do. However, when they lie on the sidewalks en masse and flail about it really disturbs me.
They just blend in with little sticks and other debris and you're about to take a step and it moves and it's a worm and you don't want to step on it. I just don't really want to step on a live worm--it doesn't seem like it would be a pleasant experience for anyone involved. I don't really want to step on a dead worm either; that's just gross.
Mainly it's just the fact that there are large amounts of worms everywhere and they're hiding and I don't want to step on them, which makes it difficult to walk down a sidewalk like a normal person.
Happy Halloween everyone!