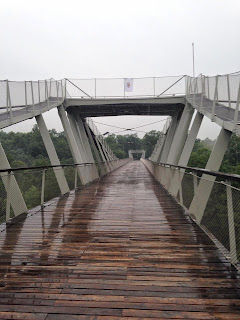 It is the end of our second day at the Summit Bechtel Scout Reserve in West Virginia. Today we went whitewater kayaking. We didn't actually use kayaks, we used inflatable kayaks, called "duckies". Most of them are designed for two people, and it's a lot like canoeing, although you use double-bladed kayak paddles. They are difficult to steer- real kayaks are more maneuverable, in my opinion.
We kayaked 9 miles in total, and did two Class III rapids in the afternoon, which was a lot of fun. That means we have completed a portion of our watercraft elective for the Ranger Award. We also built, claimed, fought over, and destroyed a large floating fortress created out of overturned duckies. It rained on and off throughout the day, but wasn't terribly cold. We were worried anyway, because today is Hypothermia Day.
I explored the Sustainability Treehouse, which was kind of neat, although I still don't understand why they didn't build a useful building, like the Visitor's Center/Trading Post, sustainably. As it is, they've made a cool, sustainable building that is not suited to any purpose besides displaying how sustainable it is. It's still cool, but it would be nice to see the solar panels and sustainable technology incorporated into places like the bathhouses.
At Action Point, I attempted BMX and mountain biking, which was pretty terrible. I also had latrine duty tonight. One of my crew members was sweeping out the youth male bathroom, and was mistaken for a bathroom authority figure due to the fact that he was holding a broom. He was questioned as to the proper methods for showering, which was quite strange.
Tomorrow is whitewater rafting, and it's supposed to be sunnier.
Posted by skj2241