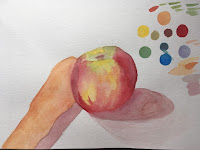 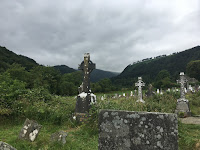 The last two weeks have been very busy. I've attended several plays and performances: To Hell in a Handbag at Bewley's Café Theatre, Futureproof at the Project Arts Centre, Room at the Abbey Theatre, and Totems at the National Gallery. Futureproof was my favorite show, and we even had the opportunity to meet the director and one of the actresses afterwards. I was also very impressed by Room. I had just read the book and had no idea how someone would put it on as a play, but the set design and the choice to have two actors playing Jack seemed to work well. I think To Hell in a Handbag probably would've been a better experience if I had more exposure to the works of Oscar Wilde, and while Totems was interesting, I don't think that I really know how to understand it, or modern dance in general.
We've begun practicing with watercolors in art class, which is fun. Patience is, I believe, still the most difficult part of all this for me, particularly while I'm abroad, and time seems so expensive right now. We had a field trip day to County Wicklow, which provided some prime opportunity for field practice. Glendalough is absolutely beautiful, as well as being a historic site.
One of the highlights of the trip so far was the tour of the Abbey Theatre. We learned a lot about the history of the Abbey Theatre, and were able to see backstage: pieces of the set for Room, and the hair and makeup department. That sounds like a cool job. Currently, the acoustics in the Theatre (partially due to the wood used on the walls) is good enough that actors do not need to wear microphones, although mikes were used for Room to help with the songs. Apparently the Abbey is going to be renovated soon, which may take multiple years, but will increase capacity. 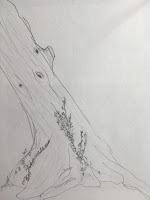 I went looking in a couple different comic book stores nearby to see if I could find any Irish comics. I'm not sure what I'm looking for, but I haven't found it yet. Mostly I've had Garth Ennis' Preacher recommended to me, but I don't think that's really what I'm interested in, and it's somewhat mainstream. I'd be more interested in something independent. I've also heard that The Hound by Paul Bolger is based on legends of Cúchulainn, which sounds interesting, but I haven't been able to find the first volume, so I'm not sure if that's what I'm looking for. Most of the information I've been able to find online about comics in Dublin and Belfast seems to be from a few years ago, which is frustrating. I did run across a few Irish-language comics while I was looking, which is pretty neat, but ultimately unhelpful for me. Of course, it's quite possible that I've just done a poor job in my research, and somewhere out there the comics are waiting for me. It probably would be best for me not to add to the weight of books I have stuck with me for now; it does make travel inconvenient.
In my dejection, I picked up the first trade for Injection by Warren Ellis, drawn by Declan Shalvey and colored by Jordie Bellaire, with lettering by Fonografiks. Ellis is an English writer, but Shalvey and Bellaire are both based in Ireland. I didn't really know what I was getting, but now that I've actually read it, I quite enjoyed the first five issues. It's an interesting mix of science fiction and folkloric influences, and the main characters each have very specific backgrounds: Dubliner Brigid Roth, English Robin Morel, Scottish Maria Kilbride, and the more mysterious Simeon Winters and Vivek Headland. I'm not really sure what's going to be happening with the plot; I have more questions than answers. Nonetheless, it seems exciting, and I wouldn't be averse to picking up future issues, perhaps when I'm home and won't have to carry them around the rest of Ireland with me. The narration lettering is particularly striking: yellow all-caps text that floats on the page rather than contained in a box, as is common. It seems very computerized, and it is unclear if the text is intended to be the interior monologue of whoever is the current protagonist or is the observations of someone else. The coloring is also particularly effective. There are no labels to explicate a change in time or place, but the change is instantly obvious. Pale yellows or purples are used in scenes of the past, when the five first began work on their project, while gloomy and intense reds and greens dominate for most of the current (rather eerie) action scenes. Meanwhile, Robin's present day wanderings through the English countryside have beautiful natural backgrounds that can vary in mood from light, golden, and hopeful to menacing and isolating.
There isn't much time left in Dublin. We depart for Galway on Friday, which is exciting, but it's disconcerting how quickly the time has passed. I believe there will be a comic book shop three minutes walk from where we're staying, so maybe I'll have better luck there.
Posted by skj2241