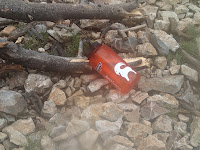 It didn't stop raining last night. I slept through my tent-mate's alarm on her watch, and also through my alarm that went off a minute later. I'm not sure if I should blame this on my tiredness or the noise of the rain. Our lead advisor woke us up about ten or fifteen minutes later. It's a cold, wet, and foggy morning. 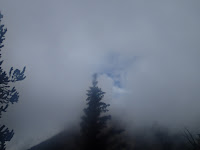 We broke camp as quickly as possible. Our tent is absolutely soaking wet. It holds up very well while it's set up, but it has water everywhere when you take it down wet and it is still raining. At least one person's sleeping bag was wet. We reviewed the signs of hypothermia before leaving camp: shivering, chattering teeth, and so on.
We stopped for breakfast pretty soon. No one wanted to eat in the cold and the wet, but the rain was showing no signs of letting up. Everyone was hungry and needed the fuel to keep warm. 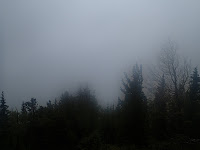 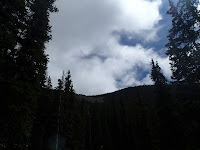 We took the road to Copper Park, bypassing French Henry. We knew they wouldn't be doing program in this weather. I was very disappointed to miss the mine tour, but there was no way around it. We had a lot of hiking to do today before we reached our campsite.
We hiked for awhile, snacking out of pockets and trying to keep everyone together in a group. The fog reduced visibility, and the conditions made it imperative that we stick together. It was hard, because our slow walkers walked even slower, while I could feel that I needed to keep moving vigorously if I was going to keep warm. Two boys started shivering, and when the shivers got worse, they had to change shirts. Their rain gear was soaked through, as were their dry clothes. Luckily, some of us brought jackets and kept them dry. (I kept my jacket in a compression dry sack.) That seemed to help them. We kept moving until we reached Copper Park.
There, we stopped. I put on more clothes, and several others changed into dry shirts. Three layers and my rain jacket was much better. We heated water and everyone drank coffee, apple cider,  or just hot water.
Pretty soon, we had to move on. We climbed up the switchbacks from Copper Park, the same ones we had hiked down yesterday, and could not see Baldy through the fog. As we hiked higher, the sun would come out occasionally and you could begin to see the rocky slope of Baldy. By the time we reached the intersection at the top, the sun had decided to come out for the day. We were all feeling a lot better. 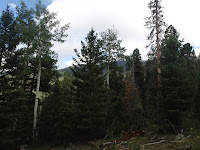 Our lead advisor had been carrying three pounds of Skittles, Smarties, and M&M's that she chose to reveal to us now. That cheered everyone up. We had a leisurely lunch while we warmed up and dried out a little bit.
We would learn days later that this freakish twelve hour rain (which does not fit Philmont's weather patterns at all) had knocked out power for the entire ranch and an enormous boulder had blocked buses from Ponil Turnaround. We had not known or cared. Many of the staff camps had no electricity and didn't really care either. It made us realize just how cut off from the rest of the world we were. 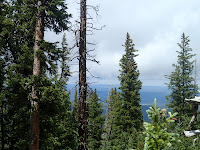 That afternoon, we hiked down Greenwood Canyon. It was a lot of hiking. We found a nice waterfall. There was water everywhere; we would not have to worry about a dry camp tonight. We finally made it to our campsite. There was nothing to mark the place, and it did not seem ideal for a campsite, but the map said we were there. Some of use even checked ten minutes down the trail before turning around.
Upper Greenwood Canyon is a Leave No Trace camping area. The bear bags took three hours. Everyone had to set up their tents to get them to dry out from the wet morning. Dinner was getting cold, and finally the advisors told us to eat dinner and finish the bear bags after dinner. We went back to work on the bear bags after dinner and cleanup. They were only a little over 5 feet high. We were all feeling very disheartened, but we managed to reposition the bags to get them much higher off the ground. We were thankful not to have to find new trees and restart with hanging the ropes.

We finally all get to bed. Our advisors have all gone to sleep, except our lead advisor, who stays awake in her tent until we give a final report. We decide to get up at 7 the next morning. All the extremely late nights and incredibly early mornings are definitely making me overtired.We are changing for bed, and our crew leader finds a food wrapper in his pocket. We really don't want to get the oops bags down, but we knew we would have to do it. We were lucky; I managed to throw the wrapper so it landed in between the bear bags and stayed, because of gravity and the way it was stuck in between the bags. I'm certainly glad we did not have to get the oops bag down. Finally I got to bed.