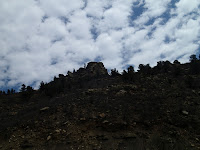 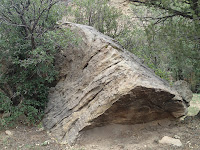 Today was another very long day.
We weighed packs at the Welcome Center scale before departure. I had the lightest pack of the crew at 38.5 lbs. Most weights were around 43-47 lbs. Our crew leader's pack weighed 68 lbs; we made some adjustments to get that weight down.
We did not get on the bus until 10am. That's when it was scheduled, but it made for a late start. Luckily, the first day is never scheduled to include very much hiking. We rode to Six-Mile Gate in the bus. The rangers have a show for the bus ride; it's pretty entertaining. When we arrived, we went over a lot of training stuff before we even left the Turnaround.
Our first destination was the world's only Tyrannosaurus Rex Track. That was pretty neat. We had lunch, our first meal on the trail, there. Then we turned around and hiked back to Six-Mile Gate. From there, we had to bushwhack to our next campsite, Campos Heck. We would learn about low-impact camping there, so we would know about it for our days of low-impact camping and bushwhacking in the Valle Vidal, later in the trek. The bushwhacking was alright, although we were basically hiking up a ridge. There was scrub oak everywhere, which gave a lot of people scrapes and cuts. There were rocks all over the place, and it was easy to trip and fall. We pushed onward, while keeping a nervous eye on the gathering clouds. We all wanted to set camp up before the afternoon storm. While bushwhacking between Six-Mile Gate and Campos Heck, we found an old horseshoe. We left it; anything older than 50 years is considered an artifact by Philmont, and we were unsure of the age. There was some confusion about where our campsite was; the sites within the Heck Tract are not well marked, but we found it. There was an elk skeleton was very close to the muddy pond that was our only water source. We still had water from base camp, at least enough for that night.
Once we got to camp, it took about four hours to set up. It was the first time we had done any of this, but that doesn't seem like a good sign to me. The bear bags were a struggle. We don't have a handy bear cable conveniently already hung for us. We have to put up our own ropes, because this is a low-impact camping area. I'm cooking tonight- cook is my favorite job. I know tomorrow will be a staff camp with bear cables and a real sump and so on, so I hope we are a little more efficient next time.We are supposed to do rock climbing, so it will be interesting to see if I am able to conquer my fear of heights enough to do it.