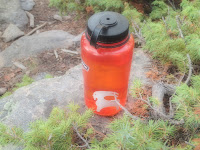 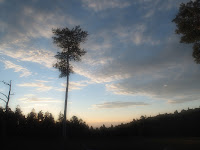 Today was my turn to naviguess.
It took us an hour and a half to get out of camp. I had only planned an hour in to my schedule in order to get to the conservation project on time. I spent the whole hike between Head of Dean and Baldy Skyline worrying about how this was going to work. We would arrive on time, but not have yet had breakfast, which definitely wouldn't work.
We hiked the trail much faster than the hour we are told to figure for the hiking and then found that the time we were given was half an hour earlier than the actual start time. We had plenty of time for a long, leisurely breakfast. I was worrying all that time for nothing.
As for the project, we were trail building. Coincidentally, the trail we were building would eventually reach Ewell's Park, the campsite we were headed to next. However, the trail was definitely unfinished.
Before we began work, there was about half an hour of instruction about the different tools, the different stages of trail-building, the parts of the trail, and so on. It was actually mildly interesting.
Then we still had the rest of our three hours to spend working. The work was not bad. Some of us roughcut and others pioneered. Knocking over trees while pioneering was my favorite part, but we moved limbs, sawed trees, uprooted shrubs, and smoothed dirt.
After that, we ate lunch, and then needed to make it to our campsite. Ewell's Park is a dry campsite, but we were able to get potable water at Baldy Skyline.
We took the trail reroute to Ewell's Park. All afternoon, the weather alternated between cold rain, light drizzle, and hot sun. We had to stop to adjust rain gear frequently, which was really annoying.
When we arrived at camp, we hung bear bags, emptied packs, and headed up to Baldy Town to pick up food and fill up on water. We brought four empty packs. We left two advisers behind with one crew member. She had fallen and bruised her knee pretty badly as we were leaving the conservation worksite. We wanted her to be able to hike well tomorrow, and since we didn't need everyone for the food pickup, she stayed behind to rest the knee. We had an instant cold pack in the first aid kit that she used.
At Baldy Town, we picked up the food, sorted through all the food for people with allergies, and so on. The commissaries had fresh fruit and milk. We had to buy more sunscreen at the trading post. We forgot to bring the empty Micropur packets to turn in. We also filled up water bottles with potable water.
The packs were staggeringly heavy on the way back. Mine wasn't the heaviest, but it was heavy enough. I didn't stop to break at all. It was forty-five minutes on the way up, but returning took us an hour.
When we returned, the people left at camp had taken pity on us and set up the tents and dining fly, so that was taken care of already.
Tomorrow we will sidehike Baldy with daypacks.
Posted by skj2241