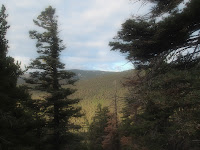 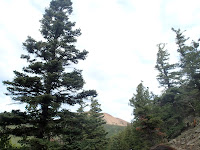 Today we hiked Baldy. We were disappointingly slow getting out of camp, even though we didn't have to pack up. We took daypacks with us. Some of the advisors preferred to just empty out their normal packs. Either way, it was not as much weight. I don't know if we could have done it with the full weight of our recent food pickup on our backs.
We had to bring the bear bags up and down, but that's not difficult when you've got a line already set up for you. (If you don't hang your bear bags high enough, perhaps in a LNT camping area, you will get hypothermia and die.)

I brought raingear, jacket, camera, breakfast, 3 liters of water, and that was it. My mother and I are food partners, and she carried lunch. I would have brought towel and shower stuff, but because of our route and the timing, we weren't going to have a chance to shower at Baldy Town. I know the trash, extra food, recycling, and empty Micropur packets were brought along to be disposed of at Baldy Town before we began our ascent. We also made sure to bring sunscreen, the crew first aid kit, map, and compass. 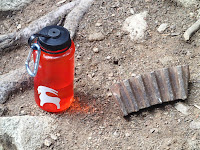 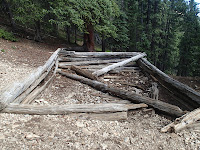 We ate breakfast and filled water bottles in Baldy Town. We took care of trash, extra food, and recycling. Unfortunately, the commissary wasn't open yet. It would not open until eight, and we needed to leave. This meant we did not get to grab any fresh fruit and, more importantly, we would be short on Micropur until our next commissary, Ring Place, several days from now. Luckily, our ranger had made sure we picked up a lot of Micropur to start out, and we had two water filters, so we weren't going to die. 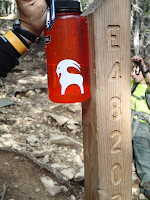 The hike was long and rough, but not miserable. Before you begin the final ascent, there is a huge meadow. It has great views, and we took some crew photos with the Mississippi flag there. 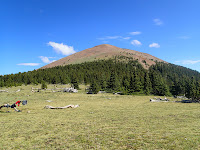 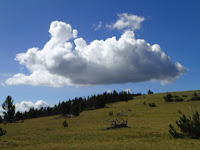 We regrouped, and began the final part of our journey.This is a very steep rocky climb that everyone has to scramble up at their own pace. One crew member just went right up to the top, barely stopping at all. I made it up third. Most of us had to set mental goals with frequent rest stops in order to make it up. Every time I stopped and turned around to breathe, my fear of heights would take hold of me. It was a long way down.
Everyone was very glad to make it to the top. Some of those who made it up earlier just laid on the rocks and dozed. We took pictures on top. The view from 12,441 feet above sea level is pretty awesome. 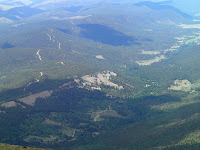 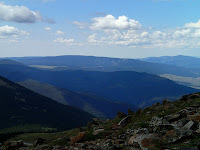 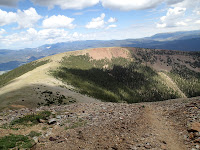 Storm clouds began to form, and one of our advisors still hadn't made it up. The first part of our group went down the even steeper slope on the other side to wait at the sign post and began putting on rain gear. The trail down was treacherous. This day was probably the day I was most thankful for my trekking pole. I'm pretty clumsy, so it saved me from a lot of possible bad falls, today and throughout my trip.
Finally, our last advisor made it up and over the peak. Sadly, he only got to glance around before heading down the other side. The weather was worsening rapidly. We all hiked./ran down the ridge until we reached the treeline. There, we spread out and took shelter close to trees (taller than us, shorter than the other trees). Fortunately, we did not have to use the lightning position. 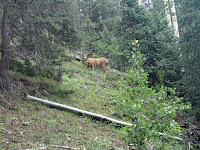 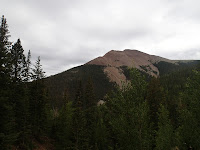 The storm cleared up where we were after a short while, and we continued to hike the ridge trail. When we found the intersection between Copper Park, Greenwood Canyon, and the Ridge Trail, we stopped to have lunch. 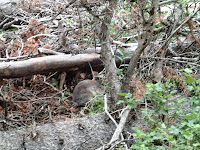 Then we hiked down innumerable switchbacks to Copper Park. We passed by the campsite and saw deer and rabbit. Then we continued down a treacherous, slippery, rocky slope referred to as "The Wall" to reach French Henry. 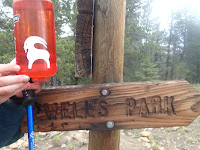 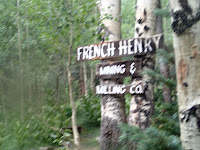 We made it to French Henry around 4, enough time to do some program activities, but unfortunately, they were not doing program because of the impending storm. We spent some time there filtering water (Ewell's Park, our camp for the night, was dry), and visiting with the staff. We were all jealous to hear about the brownies the staff were having.
Then we continued to Ewell's Park and made dinner and did all our evening camp chores. It was beginning to rain, so we were all glad to get in bed. It made for nice white noise for sleeping, and it would surely be over by morning.
Tomorrow we had a long hike to Upper Greenwood Canyon LNT Camping Area, with a stop at French Henry for a mine tour, gold panning, and blacksmithing.