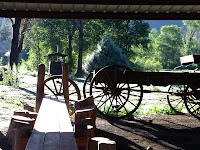 We got up at 4:30 today, and were out of camp by 6. An hour and a half to get out of camp has become the norm for us. We hiked to Dan Beard, where we had a leisurely breakfast. Dan Beard has Challenge Events. It wasn't on our itinerary to do program there, and we did not have time to do it, but it would have been cool to do program there. Their Challenge Events course is different from the one at Head of Dean.
After breakfast, we hiked to Ponil. Ponil is the Western camp. Once there we set up camp, grabbed food, and headed for our horse rides. Ponil is such a large camp that you have to figure in time to get from place to place within camp, and we needed to be at the corral before 1 for our ride. We all got fruit from the commissary on our way down there.
As soon as I entered the corral, my allergies kicked in. I started sneezing and my nose started running. Itchy eyes would come later in the day. I don't know if I could survive a cavalcade with my allergies. It rained on us on and off throughout the horse ride, which was cold and wet. Our crew leader's camera died. My camera had used up its last battery the night before, on the way to Cook Canyon.
When the ride was over our cooks for the day had to run to help with the Chuckwagon Dinner. The rest of us collected mess kits and gathered under the pavilion to wait. It began to rain in earnest, and we were all grateful for a roof over our heads. I wrote postcards to my family during that storm, waiting for dinner. It was the first chance all trip I had to write anything.
It continued to pour all during dinner. I worried about our tents getting flooded, but no one was going back to camp in that horrendous rain. We were all glad to be at Ponil, a staffed camp with a hot dinner you didn't have to cook and a roof to eat it under.
After dinner, we hung out under the roof between the general store and the cantina. When the general store opened we all looked around a bit. Some of us bought stuff, but I preferred to wait until base camp for my souvenir purchases.
Then we headed to the cantina and got root beer and played mafia. At 8, the cantina show began and our advisors rejoined us. This show was amazing - the staff provided live entertainment and we all enjoyed it immensely. The rain poured outside and we tried not to worry about what was happening to our campsite in the downpour. No one wanted to leave when the show was over, so we hung around and talked.One of the performers was from Mississippi and had even gone to the same high school that some of the crew members attended. Finally, worn out, we headed back to our campsite in the rain. We went to bed and made plans to get up at six, much later than we were used to getting up, in time for the Cowboy Breakfast.
Posted by skj2241