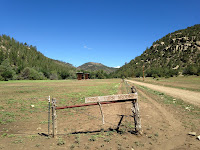 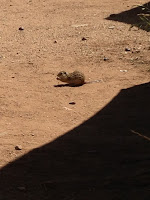 Getting up at six was a welcome change. Our advisors had to cook the Cowboy Breakfast for us - also a nice change. We gathered mess kits, let down and rehung the oops bag and headed to breakfast at seven. Some crew members were pretty slow to get up, but luckily an hour was plenty of time. Breakfast was delicious.
After breakfast, we had scheduled Cowboy Action Shooting at 8. We headed to the cabin by the range. It's policy to leave someone locked in the cabin overnight to watch the guns and ammunition. The man inside was still locked in today, because the man with the keys was running late. Anyway, when he got there with the keys, we went inside and had our safety lesson.
Then we went to the shooting range. We all got only one round each, because of an ammunition shortage. They're trying to have enough ammunition to last out the whole summer. Normally, you can buy extra rounds. I shot four out of five; it was actually surprisingly enjoyable once you got started. 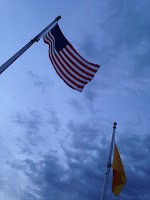 After the shooting was over, we broke camp in a hurry. We left Ponil, and stopped to get stuff branded on our way out.
Then we hiked to Ponil Turnaround, a very short flat hike. We arrived there before the bus - which is good, because no changes can be made to the bus transportation that is assigned. As we rode away from the backcountry, we realized we were only a short distance from Six-Mile Gate, where our journey began.
Once at Base Camp, we checked in, dropped our stuff at the assigned tents, and headed to lunch.
After lunch we finally all took showers and some crew members toured the Villa Philmonte. When everyone regrouped we turned in crew gear at Packs and Gas. Then we split, and I think we all went to Tooth of Time Traders for some souvenir shopping.
At 5, we rejoined at our tents and agreed to go out for dinner; we went to the Cree-mee in Cimarron. We headed backed to camp in time for the chapel service at 7, and then we attended the Closing Campfire. Everyone then went to bed. It was our last night at Philmont and I think we all were a bit sad to be leaving, even though we enjoyed things like showers and cots instead of hard ground. 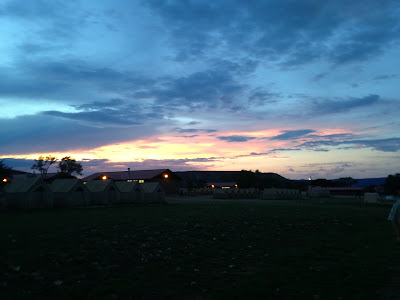